Vodka, brandy and wine from Russia, Armenia and Georgia….and then chacha!

Posted on October 24, 2019 by bitemebypamtree

If anyone asked me what I thought of cha cha I would immediately thought of the dance!  That Cuban dance with great rhythm and wonderful to watch.  But then there was talk of the drink called chacha so it was time to try it.  It is a drink from Georgia with 40 % alcohol (or 65 % home brew) made from grape residue.  Sometimes referred to as Georgian vodka or grape vodka.

But first things first and that was Russia! What is it renounded for?  Well vodka would be close to the top of the list surely and by the look of the varieties and prices of the drink in supermarkets you can be sure there is one for every taste.

Sadly I am not into spirits as I prefer wine but when in Russia do what the Russians do.  Vodka was not sipped it seemed as we do in the west…with a meal or snack but with a toast at the beginning of the meal.  Our first experience of this was when we were entertained in Moscow who provided us with lunch (yes you guessed it with bortch and a meal of tough meat with a lot of boiled potatoes).  We were instructed with the history of toasting with two types of vodka….one plain and the other a herbed one which was also drunk for its ‘health’ benefits. 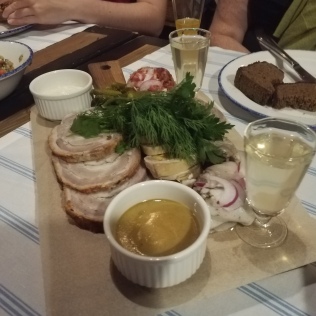 But our real introduction was perhaps in Moscow which I feel could only be called a ‘ vodka crawl ‘.  A night where we visited three different establishments serving vodka of course.  The first one was an underground bar with history and memorabilia from various wars in the time of USSR.  Had it not been in Russian it would have made an interesting historical lesson.  But we were here to try different flavoured vodkas.  Small tastes fortunately as we were in for a long night.  There were fruit flavoured vodkas – raspberry, blackberry, etc before we struck one almost undrinkable we concurred.  Someone said it tasted of paint stripper but who had actually painted this.  It was from pine cones!  Ones with ginger, garlic, horseradish, onion were those apparently used for health benefits.  This would have been obvious in the past living in Siberia with a cold, sore throat or illness but fortunately not for us.  Our second tasting was in a bar/ restaurant next to a group of tourists from Odessa  who enjoyed singing traditional songs.  Here our vodka was matched with food. Fortunately just two different types.   Some pate with fish,  cream cheese with herbs,  and sliced meats (horse, bear or deer we were unsure).  An eggplant dip, some cucumbers, dark rye bread.  Nice dishes actually and possibly my favourite part of the night.

Our final vodka tasting was underground as well in a bar where there were art creations from a well known Russian artist or satirist.  Although our guide gave us his name it has been lost in translation.   More vodka with herring, sliced onion, horseradish or mustard on dark bread.  There was a band playing and couples dancing.   But we were exhausted by now and were keen to head off to bed when a hearty and tasty dish appeared…a generous meaty, mushroom serving with mashed potato which we just could not do justice to.  When we made the suggestion to our guide that perhaps it needed to be served earlier in the night, she said this is the way in Russia.  Now I reflect on it I can imagine in the hard winters this is probably the dish one needs before venturing out in the snow and cold to travel home.  It was an interesting evening.  No one needed to be carried home as a result of the consumption of alcohol!

And I have been asked if it was ever served as a long drink as we do in the west ….say with tonic or orange juice!   I think not! 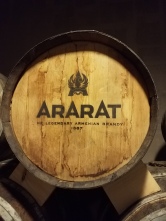 In Armenia we visited a brandy tasting establishment with a tour and a tasting.  It was a professional and well run tour with a tasting of two brandies at the end …one aged and one newer.  I have mentioned previously that small chocolate drops were given as an accompaniment which provided some confusion.  The company was also proud of the illustrious visitors who had visited the factory previously as walls were decorated with photos of well known politicians, actors, dignitaries and ‘ important people.’  George Clooney was the only one I recognized (have I lead such a sheltered life?)  But I do understand that his wife has contributed to the education of girls ìn a school in Armenia.

With the help of our excellent guide I purchased a bottle of what was the most popular brandy.  Well it was in a lovely box so I figured it should travel well.  It did and remains unopened in storage waiting for a special occasion or more likely cooking!

Georgia is fast becoming popular for its wine and history goes back to the thousands of years where the wine has been made and kept underground in large clay pots.  Most wine is fermented in these pots without any additives which make it considered ‘ natural wine’.  I remember reading that that well known writer of my favourite cook books Yothan Ottolenghi’s wine of choice is from Georgia.  Georgian wine is exported to many parts of the world but not to Australia.  I did mention in an earlier blog that our Russian food guide told us that wine in Georgia is almost cheaper than water after we commented that Georgian wine in Russia was expensive.  During the Soviet era only a few varietals of over the 500 types were allowed to be grown in Georgia.

We made two visits to wineries in Georgia which were very different. The first was very professional and well patronised.  After a tour of the winery with great history and knowledge we sampled six types (three red and three whites) all with matching cheeses.  This is the first time I had seen this.  Often wine and cheese are shared with other foods (olives, pate, vegetables etc) but this was exclusively with cheese.  Needless there was a rush to purchase for the remainder some bottles to share or take home as not only were they excellent but competitive prices.  And then was the chacha which we did not sample but were encouraged to take home. My bottle too remains unopened but is a souvenir of a trip well enjoyed. 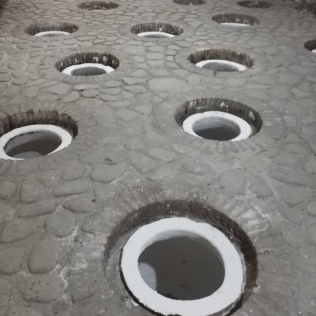 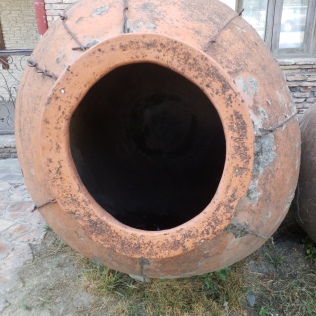 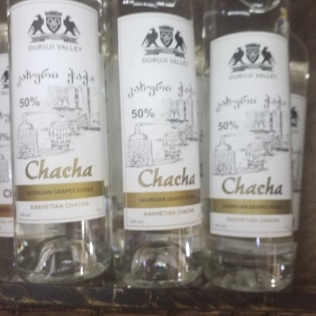 The other winery was more home grown and wine was served directly from the underground clay pots (called qvevris).  This was a more robust wine and was sold to visiting tourists our guide told us.  It was an interesting visit however and a very different type of wine.

I have since seen exclusive wine tours from Australia to Georgia which makes me ponder of the growing interest of wine production.  And as much as I would love to join this trip I plan to head back to Russia for a visit to a different area (after all it is such a vast country) and follow it with a tour of Uzbekistan.  I love this part of the world which is now opened up to the rest of the world.  Now doubt with more tastes to enjoy.

This entry was posted in Bite Me by Pamtree. Bookmark the permalink.