From Russia with love

Posted on September 17, 2019 by bitemebypamtree

It had been many decades since I had been to Russia or as it was the USSR then.  Back then we were on a camping trip and memories were scant.  A long wait through Customs with  EVERYTHING checked.  Officials took off the tyres to check to see if we were importing roubles (the currency) being smuggled in.  That was the era of taking blue jeans and chewing gum to sell.  It was very cool for Russians to have anything from the West.  We did not know then ourdriver/leader had decanted a large catering tin of instant coffee and places roubles in the bottom and replaced the coffee.  Fortunately we were unware of this pre-arrival.  Goodness I don’ know what we would have done if they had been discovered and he was thrown in jail though I was guilty of selling jeans at our campsite and then had a pile of roubles to get rid of…but that was another story.

Although it was a long and expensive process to obtain my visa as it took my kind and generous  travel agent two hours to fill in the details and she had completed visa applications to Russia before.  It had been made more difficult as we needed to submit the countries visited the previous ten years and dates.  As my passport was stolen in Lisbon a few years ago I needed to rely on the passports of two of my son’s to supply the details with whom I was travelling at the time to check for details.  But three weeks later my passport was returned with the visa and we were free to go…..

In saying this, cruise ship passengers do not need to have a visa as they arrive on vessels – up to six ships a day to clog up the sights of wonderful st Petersburg (formerly Leningrad)  which was our arrival point in Russia.

It had been exciting to pour over brochures of some of the must see sites in st Petersburg and we had arrived a few days  before our ‘Real Food Tour’ to see what the fuss was about.

After flights from Melbourne via Doha we checked into our centrally located hotel and grabbed a map to explore.  With little English written street signs we were with jet lag a little confused so hopped on a ‘ hop on, hop off’ bus to become familiar with the area.  I have done this previously when travelling alone in a new and unfamiliar city.  Our tickets were for 24 hours so we could use them the following morning and we could also use them for a relaxing boat trip around the canals with excellent English commentary.

We stopped off the bus at the ‘Savior of Spilled Blood’.  I actually had to pinch myself when we alighted the bus to see the  spectacular and colourful onion dones of the church.   It was late in the day so crowds had left so we were free to wander around and then became spellbound at the interior with its 7,000 square meters of mosaics.  Why ‘Spilled Blood’? Emperor Alexander II was severely wounded here in 1881 and consequently died.  The construction of the church was started a few years later by his son Alexander III.  It is a must see in st Petersburg.

Next morning we had The Hermitage on our radar and arrived early though there were no signs in English as to advise us where to obtain tickets so we joined the long queue and were finally allowed in the doors though we did not have access to tickets for another 30 minutes till the ticket selling office opened.

Finally we were in and headed to the Russian section.  Such opulence and grandeur!  Gorgeous and unique!  It was like a huge rabbit warren.  Then the cruise ship passengers arrived with their guide usually carrying a long stick with a flag or flower so they could keep the leader in view.  The earlier ease of taking photos was overtaken by visitors pushing their phones directly in front of your viewing.  We retreated for a late lunch of a delicious smoked salmon sandwich on light tye and headed to the hotel. 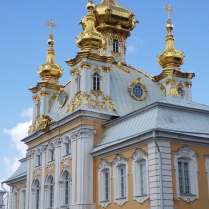 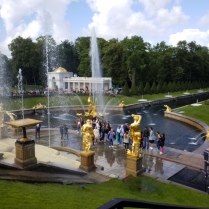 Early the following morning we headed with our guide and driver in a shiny black Mercedes on our extremely expensive prebooked trip to visit the Catherine Palace and garden and Peterhof palace at Pushkin.  Again such grandeur and oppulance,  The Amber Room was something out of this world….sadly no photographs were allowed though I don’t think one could do justice to this room.  It was restored in 2004 with funds from Germany.  Peterhof is also referred to as the Russian Versailles and the gardens and water features were beautiful.

Although we travelled by car it is also accessible by sea.

We made time as well to visit the fabulous Faberge museum which was within walking distance from our hotel.  There are nine of the eggs on display and over 4,000 pieces of decorative art.  Then time for a river cruise to see the city from the canals off the river Neve passing under the bridges which actually open in the early morning to allow for small vessels.

Our final pretour was a visit to the well known grand historical railway stations with wonderful murals and elegant decorations of history.  For the price of a regular train journey (the price is standard regardless of the distance travelled) one could visit all of the decorated stations.  Perhaps what also fascinated me was the lack of graffiti and cleanliness of the very busy stations.  Trains ran approximately every ninety seconds.  Maybe offenders were afraid of a one way ticket to the salt mine of Siberia.  Another gesture on all the trains we took in both st Petersburg and later in Moscow one was also offered a seat regardless of one’s age or sex.  One could learn a lot about travelling on the Metro in Russia and not just admire the decorated stations.

But after a few exciting days when we felt we had become locals it was time to meet our guide and fellow passengers for the Intrepid Real Food Tour of Russia.

Let the fun and food begin!

This entry was posted in Bite Me by Pamtree. Bookmark the permalink.